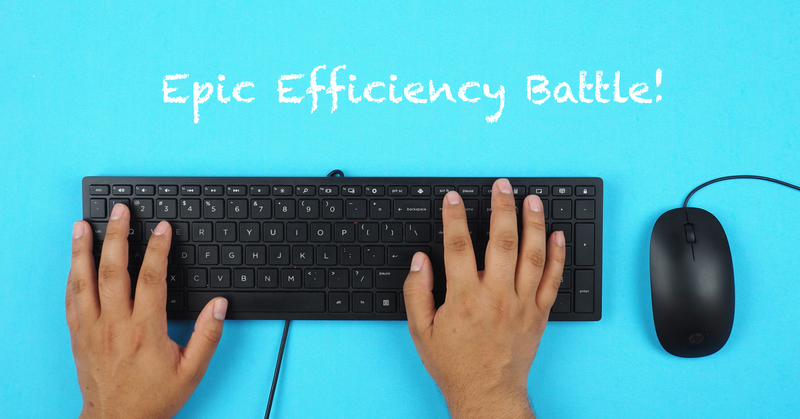 As a Mac user, there is one very specific admonition from Windows and Linux users I hear frequently; too much mouse! But I'm not just a Mac peep, I'm also a Windows and Linux guy. I started as an Tandy Radio Shack kid, became an Apple ][ kid, then a PC teen, and ultimately a Mac jerk (read: young adult.)  In the mid-90's, when the public internet was spun up, I was still a Mac guy sporting a PowerBook 145b emitting a veritable thatch of SCSI peripherals. But the story gets even more complicated.

When I met my wife and started my second phase of life as a writer, I was working on Windows books. Without any PCs at the time, I did all my work in Connectix Virtual PC. Later I would upgrade to a PowerMac 7300/200 and buy a cheap Packard Bell from Circuit City to act as a proxy server for our little dial-up network (and despite PB's history of shit, it was a real workhorse for years.)  Without going into more exhaustive detail, I would use Macs for many more years, then switch to Windows laptops for about a decade until the launch of Apple's M1 Macs would draw me back in.

My Linux journey began in New Mexico with Caldera OpenLinux at a time when there were few niceties, and certainly no app stores. I had to compile my own apps, and in order to do that, I had to learn how to do it all from scratch. I've been using one form of Linux (called a distribution, or distro for short) ever since, primarily on a Dell Venue 11 Pro tablet. My current favorite is Linux Mint, and it is light years beyond Caldera OpenLinux, a distro that passed away a long time ago amidst a raft of controversies brought about by the SCO Group's attempt to take "ownership" of Linux. tl;dr: they lost.

Over the years, working with macOS, Windows, and Linux, I have developed what I would think it a more than passing level of expertise in all three of the most important operating systems. I don't think I'm a rare bird, but I doubt that my archetype is very common at all. What this extensive experience does grant me, however, is deep insight into the user experience of these desktop systems. I think that gives me the right to say the following:

Keeping your hands on your keyboard, or not having to reach for your input device, increases efficiency? It's a stupid myth.

I hear it all the time from most all Linux and Windows power users. Taking your hand off your keyboard to manipulate your mouse/trackball/trackpad/etc, according to these naysayers, is an enormous waste of time. A killer of efficiency, if you will. Personally, I am a trackball user. My current device is an Elecom Huge (Japanese brand, funny names) and it's marvelous, but I digress. I have, however, used mice for years, as well, primarily for gaming. I also have a lightly used Apple Magic Trackpad. For my keyboard, I switch between a Logitech MX Keys for Mac and an Apple Magic Keyboard.

I use keyboard shortcuts the least in Linux. The problem I've found myself facing is, that with each new epoch of Linux and with its built-in fragmentation, there is no unified set of them. GNOME and KDE have their own and some distros introduce their own, like System76's Pop_OS!-flavored window tiling manager. And in Linux terminology the Windows/Command key is fluid, mostly due, I believe, to general saltiness over having to use the bespoke key of a proprietary OS. Unless I dedicated all of my time to Linux, I doubt I'll ever develop real proficiency with its keyboard shortcuts. One thing that Linux nerds say all the time, however, is true; using the command line can be faster. I update all of my software by typing out a few commands. There is a learning curve, though.

I use keyboard shortcuts about half the time in Windows. The issue with Windows isn't that the keyboard shortcuts are a chaotic mess, but that they traditionally use the CTRL key as the primary modifier, which is stupid since you have to manipulate it with your pinkie finger. We've had the Windows Key since 1994, and even to this day with Windows 11, it's effectively useless. Cut, copy and paste all use the CTRL key, and switching windows is performed using ALT+TAB. There is a WINDOWS+W shortcut that will close "some" windows or tabs, but the default is ALT+F4. So, the world of Windows keyboard shortcuts is long established and yet it's nearly as chaotic as the mess that are shortcuts in Linux.

You saw this coming a mile away but yes, I use keyboard shortcuts the most on macOS. Part of that is a direct result of Apple's fully-integrated environment that presents a mostly standardized set of F-keys that perform functions like media control and accessing display and navigation features. The other part comes from Apple's dedication to Command key placement and it acting as a central modifier for all basic shortcuts. There is always one Command key to the left of the spacebar, and often one to the right, depending on the keyboard. CMD+Q quits apps. CMD+W closes a window or tab. CMD+TAB switches apps. CMD+~ switches windows in an app. CMD+[ or CMD+LEFT is browser back. Cut, copy and paste are as expected. Moving around the Finder is a breeze, too. CMD+UP/DOWN/LEFT/RIGHT lets you navigate all windows and files without ever touching the mouse, and using SHIFT instead of CMD selects files as expected. There are dozens more, and if you add the Control, Option, and Shift keys, there are hundreds. For instance, OPT+R gets you this: ®. And yes, I used CMD+SHIFT+4 to make this screenshot which shows more. 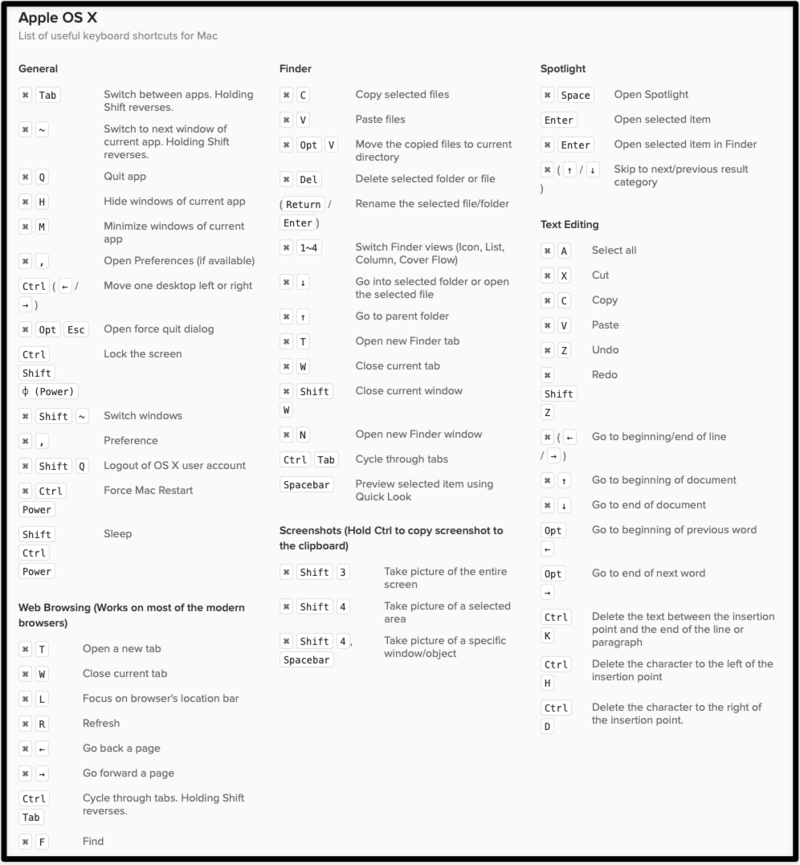 Now, I realize this is starting to sound like I'm cheerleading using the keyboard and not wasting time touching my filthy (not literal) trackball to do stupid mouse tricks that would be "easier" on the keyboard, but that wouldn't be accurate. In reality, I use my trackball far more often where it matters to me; writing and editing.

Despite being able to OPT+LEFT/RIGHT to jump around with my cursor, one word at a time, I find it far more accurate to mouse to the edit insertion point. Think about it... a mouse pointer is an extension of your hand-to-eye coordination. When you are accustomed to your input device, the pointer goes to where you look. This combination is, as Steve Jobs predicted, is key to a fast and efficient user experience. There are no keyboard shortcuts to make the cursor jump to where you're looking, at least not yet. Imagine spotting a typo two paragraphs above where you're writing. Now, get to it with your keyboard, then with your mouse. How much time did you spend doing each?

I think the difference is stark, and clearly in favor of a mouse.

Ultimately your experience will be your own or, in internet parlance, your mileage may vary. It all comes down to how you use your computer and the level of proficiency you have developed in one or more operating systems. It's quite clear that macOS is where I feel most comfortable, and I would argue that most people who haven't already used a Mac would come to the same conclusion if you could transition seamlessly. But, we all know that's not yet a thing, much like flying cars or setting up a new Android phone with the click of a button.

To the question of efficiency, I think the idea that keeping your hands on your keyboard is the single most efficient use case is bullshit. I'll admit that I'm likely biased because I use a trackball. It's always in the same place and never moves, making it a lot easier to get my hand on it. The very large track ball makes it easy to get the mouse pointer exactly where you want it (see the link to the Elecom Huge above), and I don't think very many people believe clicking a mouse button is difficult (I'm not including people who actually do find it difficult and need accessibility tools to help them.) Even so, any mouse, trackpad, or trackball leverages hand-to-eye coordination, and I think that's a hard combo to beat when it comes to general computer navigation.

So, to all you keyboard masters out there who can fly around a computer never touching a mouse, kudos to you, but I don't think the vast majority of the billions of computer users have the same experience. The combination of familiarity in your operating system and a good quality input device is the way almost all of us interact with our systems. That's all I have to say on that.

PPS: What will you do when you're not allowed to vote because you mailed in your ballot a little late and any buffer time was removed or you can't vote by mail any more? Does voting still happen on a weekday and you don't get that day off to go vote? When the polls close earlier than they used to or your state closed a lot of polling places? When you've stood in line for hours only to be turned away because the rules changed and polls no longer stay open long enough to let everyone in line vote?

PPPS: What voter fraud? Where's the proof? Why doesn't anyone ask for said proof and, when bullshit is tendered as "proof" why isn't it raked over the coals like it should? Have a nice day. I love you all, even the people who don't deserve it. We should all get the chance to live a life, not just the ones who falsely believe they're superior to everyone else.