Despite being deep inside the artificially warmed folds of Holiday Happy-Ganda Season, I had to check the calendar to make sure it wasn't April 1st. If the image above wasn't enough to convince you of the sheer janky-ness of this "concept", check out the lede from the official press release:

A leading platform for fandoms and online communities has partnered with an independent bedmaker to create the ultimate ‘TV Binge Bed’. The ‘TV Binge Bed’ includes self-cleaning sheets, a ‘Netflix and Chill’ setting, and for those who don’t want to leave their bed at all, an optional built-in potty. The expected retail price of the bed is from $14,999 (£11,321). The unique product is being developed after the platform found that the amount of time individuals spend in bed bingeing their favourite shows has increased by almost a third (31%) since 2020*.

My first question is, what is an "independent" bedmaker and why not name them? And it's not a stretch, knowing the website this is coming from, that 31% of the 1,000 respondents to their survey would want something like this as it was, I am sure, described. And yes, they are asking $15,000 for a product clearly designed by a teen in the throughs of puberty with enough experience in Adobe Photoshop to be dangerous and not enough sense to ask logical questions. Take this line from the body of the presser: 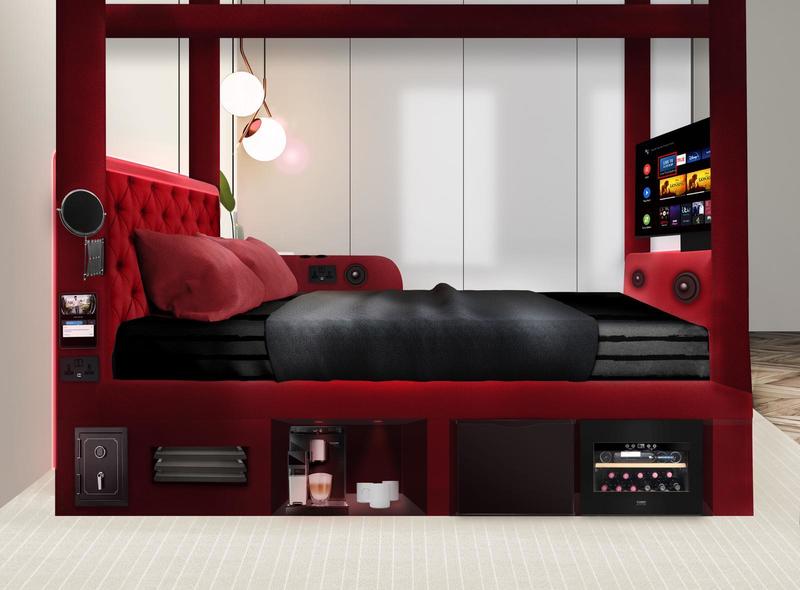 This is simply ridiculous. How would anyone other than the obscenely wealthy justify purchasing such a ludicrous bed based solely on these hideous Photoshop mock-ups? How is it the makers think that a stupidly tiny 32” flat-panel smart TV would be attractive to anyone who binge watches enough television to warrant spending $15k on a bed with an (optional, mind you) toilet? They even know the dimensions of a King-size bed, for crying out loud, and even taking the four-poster configuration, they should easily be able to fit a 55”, or maybe even a 60” set in that space.

Then there’s the starting price of $15k. That’s truly obscene. 55” OLEDs are going for about $1,500 on Amazon. So, where’s the $14,000 go? You can get four-poster bed frames for well under $1,000. All of the gizmos and cubbies are effectively nothing compared to the mattress, which can cost a few thousand alone. Decent surround soundbar systems are around $500, though you can spend more. Then there’s the toilet, which is completely beyond me why they would add this other than to have people like me talk about it, only costs a little over $100.

This sounds more like a capitalist's fever dream rather than a legitimate product.

PS: I’m not mentioning the PR firm or company offering this because I don’t want to give them any PR, but merely point out the insanity of it all. I’m sure it won’t be hard to figure out what website is behind this, but I’m not going to contribute.

PPS: Reading for the day, I’m Black but look white. Here are the horrible things white people feel safe telling me. Humanity is what you make of it, and America has a sizable population that makes it terrible for Black people. I imagine if white people had been enslaved and oppressed for hundreds of years, they’d likely feel differently. Instead, we continue to “allow” this to happen. ALL Americans who believe in equal rights need to stand together. Unfortunately, almost none of us stand for anything aside from the shade we post on social media.

PPPS: Social media is not a replacement for social justice. -Ed.