On Monday morning, we'll need to check out of our hotel. That's significant because, after that, we don't currently have another place to go, though not for any lack of trying. Ever since I got my job at Mirantis a few years ago, and lost it a few months later due to a big shakeup in their ranks, I have been unable to find work. That leaves us on a fixed income of a few hundred short of $3,000. Considering the Extended Stay America we're about to end our relationship with costs us just short of $100 a night, the math isn't difficult to understand. Of course, we need the kitchen that the hotel provides, or our daughter would get sick all the time. She has terrible food allergies, which basically means she can't eat much of anything. 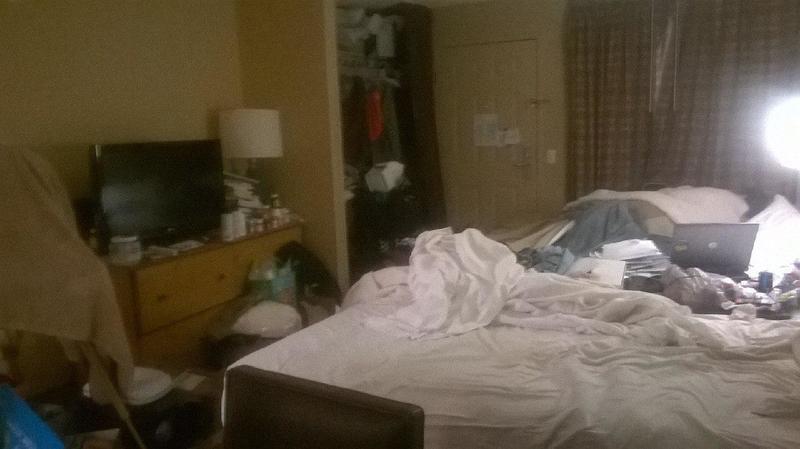 What it looks like for two adults, an adult child, and a cat to be jammed into a shoebox for over a year.

It's been about 15 months since we were evicted from our apartment in Mission Viejo. My publisher didn't pay in time, and the management people didn't care. We thought we'd stay in the hotel for a few months, and then get ourselves another place, but the world has changed significantly since we first checked in. Prices on just about everything have gone up. Requirements for getting into a place have gotten more restrictive. Our car is on its last legs. Our daughter just had surgery. Our respective families have essentially abandoned us. We have no wealthy patrons and our friends are more likely to be in the same boat as we are, or at least near it. And yet, we still push.

We don't have a choice, principally for our daughter. Being autistic, she doesn't have the skills to live a life that isn't managed for her, at least not yet. She also cannot eat just anything, due to those pesky, aforementioned allergies. We can't stop trying to save our family. I can't imagine anyone just stopping their efforts to figure out something.

I can't hear you talking to the webpage, but I didn't think you would. It's too important at a deep, personal level. As for our families, we are each something of a Black Sheep. For mine, since I was adopted nine years after the youngest, I had little "litter training" and having learning disabilities made it difficult in school. Then my parents divorced when I was five, and that's not a good start in life. I wasn't a good kid, but I wasn't committing crimes. I don't have a police record, but that was just dumb luck and white privilege. The shit really hit the fan, however, when I moved to Vermont and married my internet sweetheart. She's Jewish, and my family is Episcopalian, fully loaded with my father as Rector of a big church in Pasadena. Despite a particular Rabbi being my dad's best friend, I never got the impression he approved of our marriage.

As for my wife, she was brought into this world as the child of a Jewish mother and a Muslim father during a rather short-lived marriage. The mother is a mess and the father has been very hostile about having a Jew associated with his Muslim family. Now, mind you, both families have helped, in their own way. They gave what they wanted, and not what was needed, and after a time they just stopped. My father even went as far as to move and not tell me where. It's not a nice feeling when even your family doesn't care if you're homeless.

That's why we are running a GoFundMe campaign. We are so ridiculously out of options that we are turning to the internet of strangers for help. This is a terrible risk. Rima has been developing herself into a trusted political news analyst with a very sizable following from the New York Times. She has thousands upon thousands of followers on Twitter, Facebook, and Google+ and she blogs most every day. The great thing is that there are some people who are deeply concerned and shocked, and do end up helping how they can.

Then there are the internet trolls, and those who merely think they lean a certain way. They leave nasty notes like "Get a job" without really knowing anything personal about our lives or to understand how impossible that has become for some Americans. They change their minds about you once they know you have a life emergency. We used to call them fairweather friends. They'd only hang out on the nice days and oddly vanish when things got rough. Some people just can't handle the idea that someone can be on the very edge of homelessness and still be, well... smart. Opinionated. Passionate. Capable.

Our big plan has been to get enough to buy an RV and live in it. We've even been close enough to getting one a few times it still hurts. We have not stopped, though. All I can do is ask, beg, for help. Giving is great. It does help, but what really, REALLY helps is actively campaigning for us with people you know. Don't let the help stop at you. You have to push almost as hard as we do, in order to see some real movement happen. It's not easy, but you know what it means not to go as hard as you can. We keep pushing and pulling in as many directions as possible and keep doing our best to take care of our girly.

We will never stop doing that.