NOTE: The original title to this piece was "If you feel like someone's out to get you, they probably are". I decided to change it because I had just written down what popped into my head and it's a little "out there", if you know what I mean. Nobody is out to get me. When I spent some time thinking about it, a visual metaphor came to mind. Hence, the new title. The cape is a beautiful distraction. Inside, my soul is broken and the laughing, jovial, juvenile, and kind imbecile I project is just a shadow of who I am. Look inside the cape, and the elegance fades quickly away. And yet, I remain optimistic, hoping that one day I achieve something, even something small and insignificant. Or, something big, like saving my family.

Ah, good old paranoia. It's an American classic with two slices of cheese and a side of Freedom Fries. The funny thing is, sometimes you are completely right to feel paranoid. I know I do, and with good cause. My little family has been having the shit hit the fan for well over a year now.

It started back in 2014 when we were told we'd have to move out of the condo we'd been living in for five years because they were selling it. It happens, and I had been wrapping up my book, so we'd just move. And so, we did. Now, you're already at a disadvantage, because you don't have the benefit of understanding that we're not rich. Hell, we're barely even solvent. I earn almost nothing since I can't get work. I get little gigs here and there, but most people just ignore me. It doesn't matter how often I apply for work or what kind. I almost never hear back, and when I do, they find out I'm 47 with 20 years of experience and they ditch me then. So, it wasn't a big surprise to find out from our former neighbors that our condo wasn't sold, they were renting it out to someone else for more money. 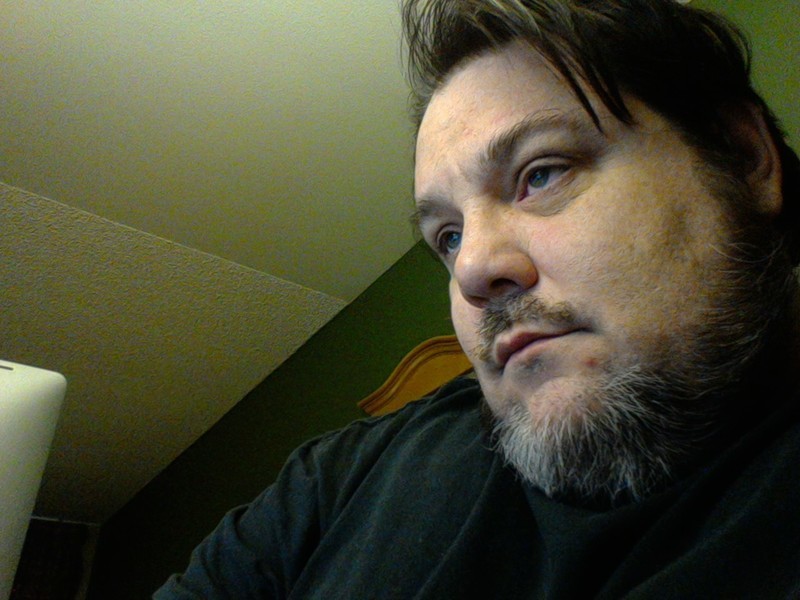 They lied to us so we would leave easier. Capitalism at work.

So we moved into a new place near the mall. $400 more a month, pretty much most of our monthly income, but it was all we could find, and I did just finish the book. The advance helped get us in, but we'd need more to stay. Then we find out the complex had been sold to another management outfit (I am not kidding, it used to be The Promenade). When we were late with the rent, there was no leniency. There was no talking. We had X number of days to pay and X number of dollars fine to pay, and we didn't make it. My publisher simply would not move any faster, and my check was a few months late to save us. The evicted us just like that.

Step two as part of a downward spiral is to move into a hotel, but not just any hotel. It has to be a hotel with kitchens in the rooms, so the rate is just that much higher. The kitchen is critical because the daughter cannot eat outside food. She has severe allergies, and I mean severe. She also has special dietary needs due to her Epilepsy. And then there's the Autism. Yes, she was dealt a very poor hand in the poker game of life, but we manage. Now, however, we move to the montage portion of the story to get through about a year of crap quickly.

The parents are involved. This is hideously humiliating when you're in the ballpark of 50 years old. It's even more humiliating when your father treats you like you're still 18 and your step monster treats you like a convicted felon. For the record, I'm not. I end up not getting what I need to save my family, so I am doomed to going back and back and back until they finally move and don't tell me where. They moved because they are old and need a smaller place, not because of me, but that didn't stop them from using it to get me off their backs. The other father lives in another country and is a raging asshole.

We hit upon a plan to buy a used RV. I thoroughly research to find it's hard, but doable, and by doable, I mean requires regular maintenance, but makes our total costs per month about $1,800. We try to coordinate family and friends and others, and they come through for about $5,000, then the unbelievable happens. I find a sweet deal on Craig's List and it turns out too good to be true. It's a classic bait-and-switch scam. We're shown a really nice RV that works, and sold one that looks like it but is crap. Oh, you should have seen them as soon as I realized what they had done. They were like cats licking their chops after the kill.

We managed to put together one more chance to get an RV, and we were careful, but it just wasn't in the cards. This time around, the RV that we could afford was sold out from under us because of an error in communications. Every day we're in the hotel is money out, so the window for making a deal shrinks by the moment, and there just aren't enough RVs that are cheap and in good condition. To keep our options open, I keep scouring the regular rentals, but all of them have gone up, people aren't interested in renting to us, and Craig's List is full of scams it takes hours to sort through to find the real ones.

If you're thinking public support at this point, you'll likely not be surprised that it wasn't and isn't an option. We make too much. Yes, not enough to live anywhere, but too much to get help. Orange County is also out of housing vouchers. Every time I call to ask. We've been on the Section 8 waiting list for four years now, and we're at position #21,405. That's a change of roughly 4,000 positions since we got on back in 2012. I've long since used up all 99 weeks of unemployment. Now, just about two months ago, while out doing something nice (and free) for the first time in a long while, we get back to the hotel to find a notice that we're expected to move out in 60 days because we pay late.

You do the math. Parents are out. Friends have all been tapped and can't give any more. Internet relations have been exhausted. Jobs are not presenting themselves. Even when they do, they don't. I've gotten a few friends popping in to see if I can do X, Y, or Z. When I can, it sounds all good, but then nothing happens. Usually after I send my CV. Following up doesn't seem to help, either. So, we start up a GoFundMe campaign to try, as a desperate, last ditch effort, raise the funds we need to get an RV, our least expensive option to have a place to live. We get some help, and it's deeply appreciated, but it's not enough.

Here we are, about a week or so away from having to leave the last place we can stay. There are no shelters. We have our car, but how did you feel the last time you slept in your car for one night? The only thing we have is the small revenue coming in every month and Rima's writing. She's prolific, too. I should know, I get to edit her stories. She gets read quite a bit, too, and so she promotes our GoFundMe campaign on her site. What happens? The hosting company we've been with for nearly a decade suddenly develops a ridiculous series of issues.

As a result, traffic trends down, less people see the campaign, and fewer people go, meaning fewer people chip in. It's like everything we do ends up heading in the wrong direction. It can make a family gun shy, but we still keep pulling the trigger hoping that THIS time something will actually happen in our favor, and then it doesn't. If I were paranoid, I'd think that someone was out to get us. Wouldn't you?

Well, that's where we're at. It's not pretty. It's not fun. It's not a party. It's mostly a daily struggle to stay sane and try to come up with something, anything to keep ourselves busy. Soon, though, it won't matter because we'll be homeless for realzies, like the On The Street kind. The kind of homelessness that treats people with medical issues and developmental disorders very poorly (as if being homeless wasn't bad enough). The kind of homelessness that prematurely ends both the promising career of a strong progressive voice for analysis and truth and the nascent talent of an artistic Autistic young woman who wants to be a Disney animator and who still managed to get herself into college nearly four years early.

I don't really care what happens to me, as long as they can thrive.

But it doesn't look like that's going to happen.

Nice knowing you, internet. Who knows, though. Maybe THIS time it WILL work out...

PS: In case you thought that my book's sales should be really kicking in, you'd be wrong. It didn't sell. It was a flop.